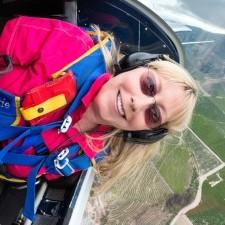 Judy is our Chief Flight Instructor and a Gold Seal Advanced Ground Instructor. Her focus is on monitoring the high quality of instruction provided to our private, instrument and commercial students by conducting phase checks; as well as teaching Emergency Maneuver Training and Aerobatics.

Mark King, Master Certified Flight Instructor with a Gold Seal-Aerobatic, CFI- Instrument, Advanced and Instrument ground instructor, is a southern California native who was born into an aviation family and began flying in 1974. Mark has extensive experience flying in Alaska in a turboprop Quest Kodiak, has over 1000 hours flying the Beechcraft Bonanza and is G1000 qualified.

He is a member of the Society of Aviation Flight Educators (SAFE) and the North American T6 formation group called the Condor Squadron. He teaches Private Pilots, Instrument, Commercial, Tailwheel, Emergency Maneuver Training, and Aerobatics.

Rochelle Oslick, Master Certificated Flight Instructor-Aerobatic, CFI, began flying in 1984, at the Edwards AFB Flying Club, while she was stationed there as a USAF Flight Test Engineer. Shortly after earning her private pilot license, Rochelle started flying tailwheel/aerobatic airplanes at Santa Paula Airport, which quickly became her favorite airport. As an aerospace engineer, several job changes, from the USAF, to Lockheed in Burbank, to Douglas Aircraft Company in Long Beach, and finally to The Boeing Company in Seattle, led her to base her flying from other airports in southern California and in western Washington. Along the way, Rochelle earned her Instrument and Commercial ratings, and then CFI, and started flight instructing part-time, specializing in tailwheel and aerobatic airplanes, in the Seattle area. After retiring from Boeing, Rochelle moved back south, to Ventura County, and is flight instructing at CP Aviation, at her favorite airport, teaching Private Pilots, Tailwheel, Spins, Emergency Maneuver Training, and Aerobatics. She is a member of SAFE, IAC, Ninety-nines International Organization of Women Pilots, Women in Aviation International, and AOPA.

Bryan Hudson - ATP, CFII, MEII, Tailwheel - is a lifelong aviation enthusiast.  He started flying in hang gliders as a teenager then moved up to the “heavy” Cessna 152 when he earned his private pilot certificate in 1987.  Bryan began flying professionally in 1990, primarily working in scheduled air cargo operations all across the country where he accumulated many hours of night, multiengine, turboprop, and instrument experience, and his Airline Transport Pilot certificate.  In 2004 he began working in the emerging unmanned aircraft industry as evaluation pilot, instructor, and systems engineer.  Bryan has been a CFI with single and multiengine instrument instructor ratings since 1991 and is a member of the Society of Aviation and Flight Educators (SAFE).  Bryan is available mainly on weekends and some evenings when the days are long.

Andrew fell in love with airplanes and flying at a very young age, having been exposed to it through his father and uncles. He had been teaching fire and disaster safety for almost 20 years when he decided he’d much rather teach flying. With that goal in mind, he took his first lesson in 2015 and is now living his dream!

Andrew is a CFI and instrument-rated commercial pilot. He holds tail wheel, complex, and high performance endorsements. He is a member of the Commemorative Air Force, Angel Flight West, and Society of Aviation and Flight Educators. He enjoys flying his Mooney to visit family, friends, and airshows around the country.

Gavin Shearer, CFI, is a first generation pilot who began flying when he was 18 years old. Since his first flight, he became obsessed with everything aviation related and has continued to receive certificates and ratings ever since. Now a multi-engine commercial pilot and single engine instructor, Gavin is sharing and expanding his passion for aviation through teaching the next generation of pilots. When he’s not instructing, he is most easily found at other nearby airports flying anything he can fit in.

Cindy is a commercial single and multiengine pilot. As a CFII, she teaches Private, Instrument, & Commercial pilots. Cindy started flying at CP Aviation for her EMT training, then continue to fly and teach at CP.

She is an active member of IAC, Ninety-nines International Organization of Women Pilots, and AOPA. Cindy enjoys flying to new airports and try different airport restaurants.

Kirk Dengler, CFII, is a fourth generation pilot who has been around aviation since he was an infant. He learned to fly at CP earning his private pilot certificate. He is always working on expanding himself as a pilot and looks forward to earning his tailwheel rating. In his off time you can find him yet again, flying in search of the greatest hundred dollar hamburger. Kirk is available everyday to instruct private, instrument, commercial, complex and high performance students.

Janie Thomas grew up flying in the Southeastern United States in her father's Piper Aztec. Her passion for aviation was renewed in 2010, when she, along with her Dad, made her first skydive and earned her USPA A license. In 2015 she earned her PPL, and has since added the Instrument, Commercial, CFI, CFII, Seaplane, Tailwheel, High Performance, and Complex ratings and endorsements. Janie and her husband own a J model Mooney, and are part owners of a Pitts S2-B. She's also the Chair of the Los Angeles Chapter of the Ninety-Nines.

Cade grew up around aviation in Santa Fe, New Mexico spending a lot of time at the airport with his father who is both a Learjet mechanic and pilot. While studying Russian and Physics at UC Berkeley, Cade decided that being a pilot was what he wanted to do in life so he got his private pilot license over the summer while home from College. After graduating college he continued his flight training at Camarillo airport and now has his Commercial single and multi-engine pilot certificate along with CFII and MEI instructor certificates, high performance, complex and tailwheel endorsements and a Learjet SIC type rating. Cade aspires to one day fly fighter jets for the US Air force or Navy. Cade is generally available to instruct any day of the week.

Andrew is a firstgeneration pilot who began flying drones for several years and therefore knew he himself wanted to experience being up in the air. After going on his first intro flight in Camarillo, he instantly fell in love with flying. Since completing all his flight training at Camarillo Airport, he is excited to begin his new venture at CP Aviation and one day hopes to fly for the airlines. In his free time he works towards more endorsements and ratings, as well as enjoys surfing and scuba diving at the local beaches.

Luke is a first generation pilot who first developed a passion for flying when he was ten years old. After flying a glider on his 16th birthday Luke has done everything he could to be in and around airplanes. Luke earned most of his ratings at CP Aviation and added a Commercial Multi-Engine rating in Camarillo. Now a Certified Flight Instructor Luke is eager to share his passion and knowledge of flight with anyone interested in learning. When not at the airport Luke can be found working on his 1993 Mazda Miata or playing his drums. Luke is available most days to teach Private and Commercial students.